Walid: "Our TPS is still a pending case...It’s been a very dark time for my family" 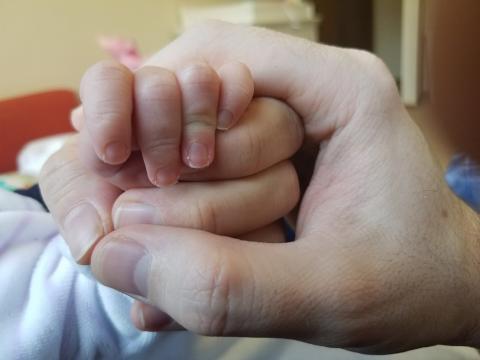 Walid, a pseudonym, is among the 7,000 Syrian Temporary Protected Status (TPS) Holders in the United States today. Walid is an information security and information assurance specialist, and a recent graduated from St. Cloud State University in Minnesota.

Despite being in a highly-demanded industry, Walid is struggling to find employment because of his TPS. Walid said, “I am getting many call-backs and second interviews. But when the question about my nationality and paperwork comes up, the interview process ends abruptly. Even one potential employer told me that they would love to hire me, but because I’m on TPS, they don’t want to take the risk with me.”

The news is extremely difficult for Walid. He is the sole provider for his wife and 2-year-old U.S. born daughter. With fear in his eyes, Walid said, “I truly don’t know how we will pay for our rent this month. I am borrowing from family and friends. But that only goes so far.”

Walid was born in Saudi Arabia and moved to Damascus, Syria in the ’90s. Syria was home for most of his life until the revolution started in 2011. Walid graduated from a private university with a degree in computer science in June 2010, and quickly entered the workforce. However, it wasn’t until a few months later when the Arab Spring took a turn from peaceful protests to violent clashes.

“Things escalated really quickly. It went from bad to worse in just a few weeks. Although Damascus wasn’t ‘as bad’ as other parts of the country, we felt the impacts of the war. Inflation skyrocketed, the economy collapsed, people who lived on the outskirts started moving into and overcrowding Damascus,” Walid stated.

Walid’s family were in the upper to middle class. Coming from a well-known family, Walid’s parents knew it was only a matter of time that their sons would be kidnapped for ransom by thugs. So, they pushed Walid and his brother to leave Syria by the end of 2012.

“Malaysia was one of the few countries that allowed Syrians without visas. But we didn’t know anything about the country! Everything was so different there. We were hungry for Syrian food and craved speaking Arabic with friends. So, it wasn’t long until I decided to look for a job in Dubai, as many of our Syrian friends were there,” Walid said.

Unfortunately, Dubai was not the solution for Walid’s quest for stability and livelihood. Every job he applied to told him, ‘we would love to hire you, but the UAE government is not providing Syrians with work permits.’ Frustrated and afraid, Walid decided to make big moves.

Despite being in a turbulent time, Walid was falling in love with a Syrian girl living in Dubai. He knew she was ‘the one,’ and so the next move he would make would be for her and their future family. Walid reminisced on those days saying, “She was literally the only reason I survived those difficult months. Love really keeps you alive and thriving. She was my anchor.”

Walid proposed and had a small ceremony in Dubai. Since the conditions in Syria were so dire, many newlyweds were foregoing huge expensive wedding celebrations because of the war. “It was a way for us to show respect to the thousands who were being killed in our home country,” Walid said.

Walid’s next big move was the U.S., where he was accepted to do his masters at St. Cloud State University in Minnesota. In December of 2013, he received an F1 visa for him and his wife. In May of 2018, Walid graduated from his program and was accepted to do an internship at one of the largest insurance companies in the U.S.

While Walid was in his master’s program, he heard about TPS for Syrians and applied in 2015, with hopes that he could work legally in the U.S. Unfortunately, Walid did not get the proper documentation in time, and for that reason, he lost his paid internship. Luckily, his employers were sympathetic and understood his situation. So, once Walid received his work permit, he was offered the internship position again.

As he waited for his TPS, his wife was expecting their first child. The parents-to-be were excited about their new family. However, the uncertainty of their status and not securing a stable job was keeping Walid up at night.

“Any new parent will have a mix of nerves and excitement when they are expecting their first-born. But for my wife and me, it was more nerves than anything. As Syrians, we knew we needed to fight to survive and to give our daughter the best life she could have. There was no way we were going back to Syria; it was just too dangerous for us. We prayed that our TPS would come through.” Walid said.

Finally, Walid and his wife received TPS, and their daughter was born as an American citizen. Although, attaining TPS has been very problematic for Walid and his family. Due to the delays, Walid lost many opportunities. He said that the system was very hard for him to navigate.

“When I contacted USCIS, I wouldn’t get the answers I needed. It was extremely frustrating for us. If our TPS expires, we really don’t know where we’ll go. How can we go back to a war-torn country with a 2-year-old?” Walid stated.

Walid is working with different advocacy groups to help his case. Although the Department of Homeland Security renewed TPS for Syrians on August 1 for 18-months, it did not help Walid and his wife.

Walid said, “Our TPS is still a pending case so I am not sure if I can even apply for the new TPS. I am still waiting to hear about my pending petition, and then I will know about my status and maybe get a work permit. It’s been a very dark time for my family and I. We hope we will be able to survive this long wait.”