A Syrian Tailor Finds a Home in Chicago 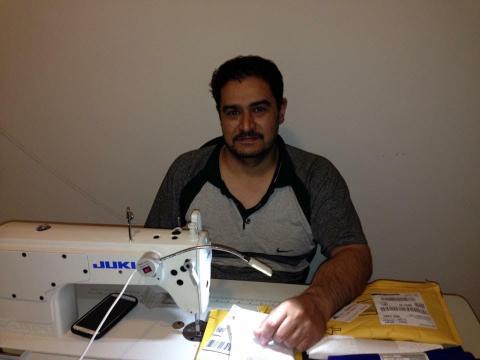 Ahmad Al Atrash does not like to be called a refugee. To him, a Syrian who fled a brutal civil war in his country, that word is loaded with negative connotations, and separates him from the community that has now become his home: Chicago. Six months ago, he and his family resettled there. I recently had the chance to discuss with him his thoughts on the crisis in Syria, his experiences at a refugee camp in Jordan, his journey to the United States, and his hopes for his family and children.

“I loved it,” Ahmad said of his job and the city. In Homs, he and his family lived in a big suburban house  in what he considered “a pretty nice neighborhood,” with farms, family, and friendly people nearby. But all of that changed with the war and the the destruction of the city. Did he ever think his life would change in a matter of a few short years? “I never, never, ever imagined this would happen,” said Ahmad.“If I had a time machine, I would love to set it back and live in the past.”

For Ahmad, making the choice to leave his home in search of safety in another country—and, in fact, to become a refugee -- was a very difficult decision.

“Hardest part was not knowing when I will be able to see my father or my siblings again,” he said as he reflected on the times he lived close to them. Now scattered on different continents, his family is what he misses most about Syria. Ahmed’s sister resettled in Canada, two of his brothers escaped to Egypt, and his mother is in a refugee camp in Lebanon. His father, another brother and sister still live in Syria. Though Ahmed has not seen them in five years, he communicates with them as often as he can—whenever Syria’s erratic internet access makes the connection possible.

For many of those who have stayed in the country, hardships abound. Ahmad said, some people can’t afford to meet even their most basic needs, such as for food, and families are not safe.“You never know when the bombs are going to come,” he said. Fear for his children’s lives pushed him to pack up his family and leave.

Once that decision was made, Ahmad traveled  to the Jordanian border with his wife and kids. The family was stopped by Jordanian police and taken to a refugee camp in Amman. Shortly afterwards, he received a call from the UNHCR about a possible interview for resettlement in the United States. The family went through various background checks, interviews, and medical examinations over a period of eight months. If Americans understood  how thorough the vetting process is, that could reassure them about the US resettlement program, said Ahmad. “They don’t bring evil people,” he said. “They make sure we don’t have intentions to hurt anyone.”

After they received the green light for resettlement in Chicago, Ahmad recounts feeling scared. Not only was he moving to a new country, but his disability requires him to use a wheelchair which could complicate matters.  In spite of these concerns, he saw a chance for a better life for his children, and with hope, he moved to his new home in the US. There he was resettled with the help of Syrian Community Network, a Syrian-American humanitarian member organization of ARCS, seeking to assist Syrian refugees in the Chicago area.

He enrolled his children in school - something they were unable to do in the refugee camp - and connected with other Syrian refugee families in the area who have had similar experiences. And while much of the city is wheelchair accessible which makes it easier for Ahmad to get around, he has experienced challenges in finding work. He said the Syrian Community Network is working to find him a sewing machine which will make it easier for him to work from home as a tailor.

Aside from the Syrian American community, he said Chicagoans have been “very, very kind and welcoming” to him and his family. Supportive, Arabic-speaking teachers help the children in their studies at school. Their ability to receive an education is of the utmost importance to Ahmad. His long-term dreams are “always the kids.” For now, it is important for him to “feel like I can support and provide for my family.” Throughout the transition, he has been learning from his children, particularly the ways in which they adapt to a new life and do not let the memories of Syria hold them back.

Recently,  President Donald Trump signed an executive order that suspends the U.S. Refugee Admissions Program (USRAP) for 120 days and denies entry to nationals from Sudan, Libya, Somalia, Iran and Syria. Ahmad said he was stunned by the order.

“I was very shocked and disappointed. We did not expect that,” he said. “We did not expect anyone would turn their backs on refugees. They shut the door on their face and let them deal with their problems.”

He recounts his own journey and says, “You have no idea how many people are living hard, hard lives. People need to understand that the Syrian people are innocent and escaping to come to a safer place.”

If he could tell Americans one thing about him and his family, Ahmad would want all to know that they are “a regular, normal family who have come here to find peace and be safe.”

Update: After conducting this interview, Ahmad has found work as a tailor in the Chicago area.