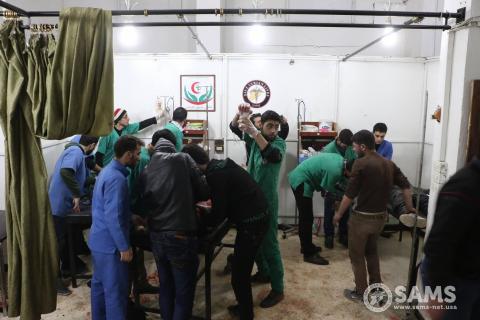 February 12th, 2018 (Washington, D.C.)--Over the past weeks humanitarian organizations on the ground have been witnessing some of the most intense and distressing scenes since the conflict started. Recent reports of chemical weapons attacks and airstrikes targeting hospitals attest to the deterioration of any semblance of safety or security on the ground. Members of the American Relief Coalition for Syria (ARCS) urgently appeal to the international community and all conflicting parties to halt violence and cease the intentional targeting of schools, hospitals, and other civilian areas.

ARCS is appalled by the international community’s silence as the civilian death count rises and the security situation rapidly deteriorates, especially in “de-escalation zones”. More than 300,000 civilians have been internally displaced in Idlib since December 2017, when the latest wave of violence erupted. Since the beginning of February at least 1,000 civilians have been killed. Hospitals, residential neighborhoods, and marketplaces have been targeted leaving dozens of families displaced, and hundreds injured.

Reports indicate that at least 9 people were hospitalized and treated for trouble breathing after a bomb, filled with chlorine, was dropped in Saraqeb city on Sunday evening. In the space of only four days last week, more than 200 civilians were killed in besieged Eastern Ghouta, a suburb of Damascus. At least 30 civilians were killed on last Monday alone.

As humanitarians committed to supporting and uplifting communities on the ground, we call on the international community to take the necessary steps to stop the violence and ensure the protection of civilians on the ground.