The Story of a Truck Driver’s Son: A Constant Struggle of Rebuilding 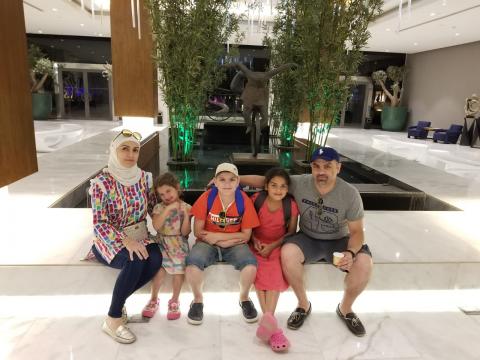 I came to Lebanon in the summer of 1990 to hide from my friends and neighbors in my hometown of Aleppo. I believed I did well on my Baccalaureate exams, but I was afraid of disappointing my loved ones if I had not, so, I hid in the beautiful city of Beirut and waited for my test results.

I was one of the top students in my class, and I can still remember the phone call from my father telling me that I made my family proud, which was one of the best days of my life. My father, grandfather, and great-grandfather were all truck drivers, but once I received my test results, I became the first in my family with high enough marks to become a doctor or dentist. I still remember how my father’s eyes were shining in front of me when he heard the news. He said, “you made your truck driver dad so proud!”

In 2000, I graduated and needed an office to practice, so my generous father bought me a new place to set up my future dental office and did so with pride. Owning your own practice right out of medical school was normal in Syria.

Less than a year later, I was required to complete the mandatory military service, but to avoid doing so, I sought employment in other countries and signed a contract in Saudi Arabia. I told my father that I was moving to work as an orthodontist in Riyadh. My dad was angry since that meant I would leave everything I had just built and would need to start from scratch in a country where I did not know anyone. I was very close to my father and always listened to him, but this time I wanted to explore other opportunities and prove to myself that I could do it.

I still remember the moment I landed in Riyadh and saw all the sand, thinking “What have I done to myself?” It would have been easier to stay back home like most of my friends and colleagues, but I knew I needed to work hard and create a life for myself.

Within a couple years, I moved to Jeddah, where I became one of the most well-known and reputable orthodontists following several years of work in the area. People generally spoke very highly of me there, which made my “truck driver dad proud.”

In 2005, I got married and had my beautiful first son, naming him Saleh after my father as per tradition. Unfortunately, after a couple years, we learned that our son had autism. At that point, I was unaware what autism was or what it meant for our family. It became very expensive and difficult to find professionals who could help him deal with his condition. So, in 2010, after a few years of little help in Saudi Arabia, my family moved back to Aleppo so my son could start school. I thought that move would be better for our family, or so I thought.

In 2012, war took over Aleppo, and in August of that year, my family and I decided to move temporarily to another country. We thought we would only be away for a short while. None of us could have imagined how long and catastrophic the war could be.

My family and I moved to Egypt, as it was easy for Syrians to go to without a visa at that time, but the situation became more complicated in Syria, and it was almost impossible for anyone to return, especially with an autistic child and newborn. However, we learned that there were more affordable programs for him in Syria than in Egypt or Saudi Arabia. Any activity, such as private training, therapy, or a school for autistic children was much more expensive in Saudi Arabia than it was in Syria. In Egypt, I struggled to find schools that met his needs and my standards, so, we moved back to Syria despite the war.

Late in 2014, I received my US visa. I told my wife, “Let's go to the US and explore what programs are available for autistic children. That way our son’s condition could slightly improve.” We left for the US after researching the different types of schooling and therapies available for those who suffer from autism. During that time, my sponsor in Saudi Arabia decided to cancel my visa, which prevented me from returning their and left me with no other viable solution to return to the Middle East. With Syria in greater turmoil, Egypt no longer providing Syrians with visas, and no valid visa in Saudi Arabia, we found ourselves stuck in the US.

Luckily, we heard about the Temporary Protected Status (TPS) program for individuals from certain countries with dangerous and unlivable conditions. We applied for TPS as a family and were accepted six months later. After receiving TPS, and with my life savings dwindling rapidly, I quickly began looking for a job. It was very difficult to find employment, but I found a position as an orthodontist assistant. I was working during the day at the dental office and I worked as an Uber and Lyft driver at night.

I tried to study to pass my various board exams as required by the American Dental Association to be a licensed and practicing orthodontist in the US, but with a family of five, it was almost impossible. I often stressed about trying to feed them all, pay the bills and keep them within the same living standards to what they were used to.

Now, I have been in the US for almost five years. My father, the truck driver, is now almost 75 years old and needs me to be near him. Unfortunately, we are still on TPS and are unsure if our TPS will be renewed, or if we will ever get permanent residences in the US.

Regardless, rebuilding from scratch is something my family and I have done several times now. I just hope one day my country, Syria, becomes safe enough for my family and I to return, settle, and then rebuild it along with my country men and women. I cannot wait for the day when all of my children meet their grandfather back in Syria, and have him say to them, “your truck driver grand-father is so proud of you.”