Oscar: “The biggest problems with TPS is the instability and travel restrictions." 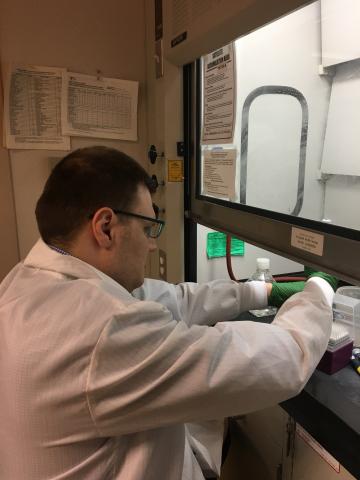 Oscar, a pseudonym, is one of 7,000 Syrian Temporary Protected Status (TPS) holders living in the United States. Oscar graduated as a medical doctor in the Middle East and came to the U.S. in 2011 for an observership, a program for international medical graduates. Soon after he arrived, the uprising began in Syria. He found himself stuck in the U.S., as his family told him not to return to Syria because his home town was being heavily attacked. Oscar waited and eventually applied for TPS.

During this time, Oscar applied to numerous volunteer positions at hospitals, research centers, and academic institutions, in hopes of building his CV. After two years, Oscar was accepted for a research position at an Ivy League university. Today, he works with the latest technologies to help identify bacterial and fungal biomarkers that will eventually be used in diagnosing fungal and Community-Acquired Pneumonia (CAP).

Oscar, along with his team of researchers, are on their way to better diagnose and treat infectious diseases, like CAP that impacts between 4-5 million Americans a year, with 1.1 million hospitalizations and 50,000 deaths annually in the U.S.

America needs talented and highly-skilled individuals like Oscar help better our country. Oscar is one of the many Syrians at his institution conducting the latest research in medical and academic fields. TPS for Syrians should be renewed and redesignated to entice brilliant individuals like Oscar, who are fleeing persecution, to come to the U.S.