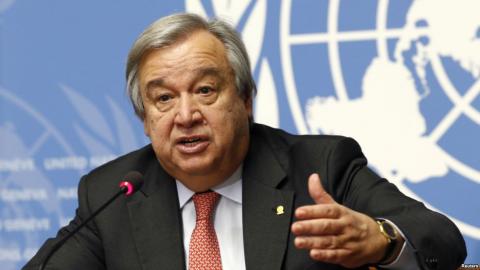 As the UN Secretary General you will be faced with the world’s most difficult challenges: the refugee crisis, climate change, and ongoing wars and violent conflicts. We are pleased by your commitment that the Syrian conflict will be at the forefront of these priorities, and we trust that you will make a serious effort to bring peace and stability in our country.

ARCS would like to support you and the UN to achieve this. With our members operating in the US, Turkey, Lebanon, Jordan, Greece, and Syria, ARCS can provide the knowledge and network to help gain trust, build relationships, and provide strategic counsel when needed to the UN to reach these goals. Our coalition includes health-workers, educators and aid workers working together to provide relief in a variety of sectors.

Our efforts last year helped keep open 119 schools and 145 hospitals. One of our member organizations, the Syrian American Medical Society (SAMS), treated 2.6 million Syrians, provided psychosocial services to 250,000+ patients, and delivered 24,318 babies in 2015. It was SAMS doctors, who are among the last doctors remaining in Eastern Aleppo, who treated Omran Daqneesh, the five year old boy who survived an aerial attack in August and whose picture made headlines throughout the world.

Your excellency, we appreciate your passion and desire to foster a resolution to the conflict in Syria that has already taken far too many civilian lives and destroyed a beautiful, ancient country. We look to you as a beacon of hope and possibilities, and we hope that you lead Syria to a better and more peaceful future.

Our member organizations are committed to leading the way for a peaceful resolution to the conflict and rebuilding a post-war Syria. We hope that we will be able to work closely with you to achieve these goals, and know that we are ready and willing to help in any way needed.

On behalf of ARCS, thank you for your work as the High Commissioner for UNHCR, and we eagerly await the start of your tenure as Secretary-General.

Hope for Relief and Development for Syria