Joseph: "The hardest thing about TPS is the uncertainty" 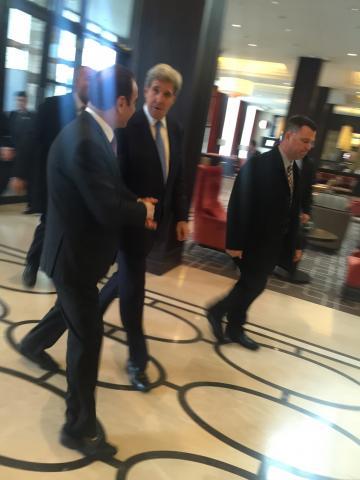 Joseph, a pseudonym, is among the 7,000 Syrian TPS Holders today in the United States. Joseph is in the hospitality industry and has managed high-end hotels all over the world. However, one year, Joseph put himself and his entire family at risk to protect the U.S. government.

While Joseph managed a hotel in an unstable country in the Middle East, his main guests were U.S. diplomats, government officials, and marines. Because of this work, Joseph was soon approached by Syrian intelligence operatives to gain confidential information about Joseph’s American guests, asking about their activities in the country. Joseph succeeded in rejecting such intolerable requests, insisting he had no information to share.

The negative backlash that Joseph received was quick and lethal. Joseph’s name instantly became recognized by anti-American terrorist groups and the Syrian government, both seeking retaliation for his dissent. Joseph was told by his friends who worked with the Syrian government that he should not return to Syria. If he did, he would be arrested and interrogated for his work he with the U.S. government.

Thousands of innocent people in Syria have been, and continue to be,  detained and tortured for illegitimate reasons. Men, women, and children are put into horrifying jail cells, with conditions violating human rights standards. If Joseph returned to Syria, he could have been one of them. Joseph knows that being thrown into a prison in Syria could mean months, years, or even his entire life without a fair trial. He feared for his life, and his family’s lives, so he considered his next move.

Joseph applied to countless countries, but was rejected because he was a Syrian national. Joseph did not want to illegally cross the seas by boat and walk from the Greek Islands to Germany just to seek asylum. That would put him and his family in life-threatening conditions, he just couldn’t fathom.

Since Joseph worked closely with the U.S. government, he tried his luck there. So, Joseph traveled to the U.S. with his wife and daughter and applied for Temporary Protected Status (TPS). Despite not having a job and relying on his life savings, he never lost hope because he believed in American values and leadership, and the country’s standing as the leader of the free world.

Now, Joseph has been in the U.S. since mid-2016 and he was granted TPS in August 2017, along with his wife and daughter. He pays his taxes, and he has spent all of his life’s savings here. Now, he is struggling with what he will do in the future. Joseph doesn’t know where he will go with his family next if TPS is not renewed.

After all that Joseph has done for the United States, it is our duty to show our respect and appreciation to Syrian TPS Holders like him and renew and redesignate TPS. We must continue to provide them the protection they deserve, and in Joseph’s case, the protection he provided to our U.S. officials overseas.