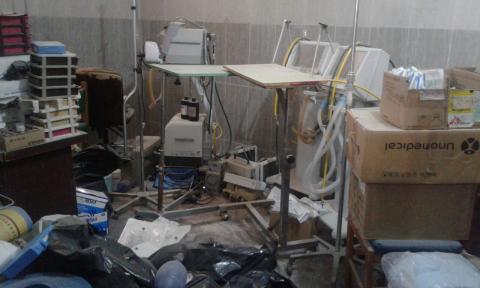 (Washington, D.C.) —Two of largest Syrian hospitals in the besieged part of Eastern Aleppo were targeted by five artillery shells and several airstrikes Wednesday morning. Several patients were killed and three hospital staff members are critically injured. One of the hospitals was the only trauma center that remained in Eastern Aleppo. Both hospitals are completely destroyed and are no longer able to serve patients.

The American Relief Coalition for Syria (ARCS) are alarmed by these blatant attacks on humanitarian efforts in Syria. “Attacking hospitals, aid convoys, and rescue workers is beyond horrific. We are shocked that the world continues to allow this to occur. For the past five and a half years, civilians have paid the ultimate price for the world’s inaction in Syria. Every day brings new levels of horror for the people of Aleppo. By standing by and letting these attacks continue, it tells us the world has lost its moral compass,” said Dr. Zaher Sahloul, founder of ARCS.

“The deliberate targeting of the two largest hospitals in Eastern Aleppo is absolutely deplorable. Aleppo lost its last life-line to security and hope.  This is a humanitarian disaster and we should all hang our heads in shame,” continued Dr. Sahloul.