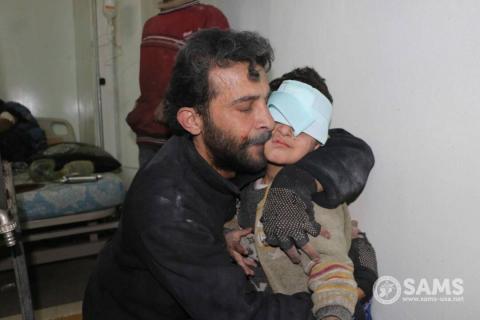 (February 22, 2018) More than 300 civilians have been killed by the Assad regime and its Russian and Iranian allies in the last 72 hours in an extermination campaign against the civilians of besieged Eastern Ghouta. In response to these egregious crimes, Syrian-American organizations stand united to demand that the targeting and killing of civilians, humanitarian aid workers, and medical facilities be immediately halted; that unfettered humanitarian access and food delivery be guaranteed; and that the perpetrators of the crimes committed against the people of Eastern Ghouta be held accountable. The Syrian-American organizations express their horror at the international community’s inaction and call for a #SaveGhouta Week of Action to advocate for the besieged population.

In addition to those killed, the past three days have seen more than 2,000 injured and at least 22 medical facilities targeted. The escalated attacks on Eastern Ghouta have included airstrikes, barrel bombs, and surface-to-surface missiles. With an upsurge of regime troops on the outskirts of besieged neighborhoods since the weekend, a full-scale ground military assault appears imminent. The Assad regime’s campaign in Eastern Ghouta is an eerie reminder of the siege, brutal escalation, and destruction that led to the fall of Aleppo in December 2016 and the forced displacement of Aleppo’s citizens that followed thereafter.

The almost 400,000 residents of Eastern Ghouta have been subjected to a brutal, barbaric siege for nearly five years, depriving them of the most basic food and medical necessities. Nearly 12 percent of children under the age of five are acutely malnourished. At least 12 civilians have starved to death or died due to medical shortages in Eastern Ghouta since November 2017. Chemical weapons attacks have suffocated others to death and continued without check; the Assad regime has used chemical weapons at least 5 times in Eastern Ghouta since mid-January 2018. Civil and medical facilities, among them schools and hospitals, have been bombed out of service. Despite the announcement of a recent January 26 ceasefire agreement, the majority of humanitarian aid convoys were not granted proper access, medical evacuations were not allowed to occur in a timely manner, and hostilities quickly resumed.

On Tuesday, UNICEF demonstrated their exasperation with the humanitarian travesty unfolding in Eastern Ghouta by issuing a “blank statement”: “No words will do justice to the children killed, their mothers, their fathers and their loved ones.” While the international community may be at a loss for words to describe the horrific brutality of the Assad regime and its allies, the time for action is now.

In the first call for action today as part of the #SaveGhouta Week of Action, Syrian-American organizations ask citizens across the world to:

By aiding the Assad regime in brutal war crimes and crimes against humanity directed against the Syrian people, Russia is complicit in some of the most egregious atrocities of our time.

*The Syrian-American organizations signing onto this statement include Americans for a Free Syria, the American Relief Coalition for Syria, the Syrian American Council, the Syrian Forum, and the Syria Campaign.