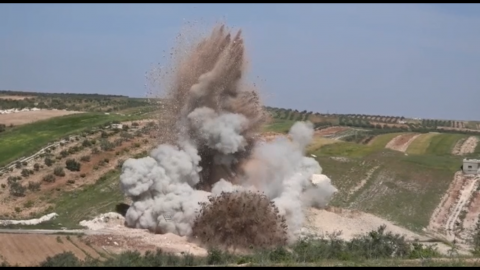 Washington, DC (May 7th, 2019)- Members of the American Relief Coalition for Syria (ARCS) are appalled by the increase in airstrikes and bombings that have taken place in northwest Syria since last Wednesday. Conducted by the Syrian government and their allies, these attacks have targeted and destroyed hospitals, education centers, homes, internally displaced persons' (IDP) camps, as well as other densely populated areas in violation of international laws. The continued violence hampers relief and aid efforts, including lifesaving support, and it threatens to trigger a further escalation of refugee and humanitarian crises in the region. ARCS calls on the international community to:

Over the last few months, Idlib, Hama, and other parts of northwest Syria witnessed an escalation in violence and casualties, with at least 300 civilians killed, and almost 140,000 people displaced. The bombings, which includes the use of barrel bombs, are the worst in over a year and have killed at least a dozen children in the last couple weeks. ARCS joins the EU and UN in calling all parties to uphold de-escalation agreements and ensure the protection of more than three million civilians in Idlib and Hama.

Many ARCS members’ humanitarian and lifesaving programs in Idlib and other parts of northwest Syria have been critically impacted due to Russian and Syrian government airstrikes and shelling, including:

“Our hospital was one of the major trauma hospitals serving Idlib and northern Hama which has continuously been targeted this week. The attack left parents and children suffering in pain and with no medical assistance,” said Amany Qaddour, SRD’s regional director.

“The locations of all our medical facilities are shared with the UN in an attempt to protect them. But schools, hospitals, IDP camps, markets, and densely populated civilian areas continue to be intentionally targeted by airstrikes and shelling, in clear violation of international law. When will action be taken to stop these crimes? The international community’s failure to hold the perpetrators accountable or to take action to prevent these attacks indicates either apathy or acquiescence," said Dr. Ahmad Tarakji, chair of ARCS and president of SAMS.

While the violence and airstrikes have prevented some aid and relief projects in northwest Syria, ARCS member organizations will continue to provide services in as many towns and cities as possible.

ARCS members provide critical relief and development support to all sectors both in and outside of Syria. ARCS is willing and available to discuss the humanitarian and civilian impact of local, national, and international policies with American and international officials and other decision makers. With our member organizations’ staff located across Syria, ARCS is ready to offer insights regarding the humanitarian costs and consequences of policies.

Please contact info(at)arcsyria.org for more information or to be put in touch with our member organizations directly.