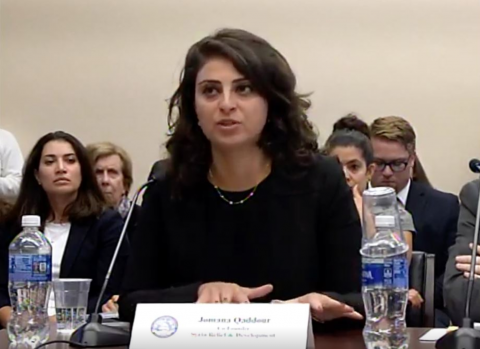 Co-chairman McGovern and co-chairman Smith, thank you for inviting me to testify before this panel to discuss Syria and its humanitarian crisis. I am the co-founder of Syria Relief & Development, a Syrian American humanitarian organization that has delivered over $75 million worth of aid in Syria and the region, and has assisted over 7 million beneficiaries and employs over 1000 people inside of Syria. I want to touch on a few key issues, and offer several legislative recommendations that Congress can take into consideration before taking your questions.

The current scale of humanitarian devastation in Idlib and northern Hama surpasses everything Syria has seen so far. According to the UN’s High Commissioner for Human Rights, since April, more than 1,000 civilians have been killed, including over 300 children. Airstrikes have targeted over 40 hospitals, 29 water stations, and dozens of schools. Seventeen whole villages have been destroyed. In five months, more than 600,000 Syrians have been displaced:  to put this number into perspective, Ghouta displaced 80,000 civilians and Aleppo displaced 39,000. No humanitarian organizations, including the United Nations, are financially or logistically prepared to absorb the devastation to come as civilians scramble northward. Scarce housing has quadrupled in price, costing approximately $400 a month for an apartment. Only 50% of students displaced in Northwest Syria will have a chance to continue their education because more than a quarter of all schools are damaged, destroyed, or occupied by the thousands of homeless and displaced.

The situation for the over 3 million Syrians in Idlib is becoming more fragile by the day and may soon result in a new refugee crisis. Greece has already begun seeing an increase in the number of refugees arriving from Syria at levels not seen since 2016.

The deadly escalation on the ground has directly impacted Syria Relief & Development’s capacity to provide services. In May, our Pulse of Life hospital in the town of Hass was among those bombed and completely destroyed by the Russian military. UN OCHA was provided with the hospital’s coordinates as part of its formal deconfliction mechanism with the expectation that by doing so it might be spared attack.  We were wrong. Our hospital was deliberately targeted, leaving the local population of over 200,000 without medical services.

Despite this setback, Syria Relief & Development, along with 9 other Syrian American humanitarian organizations, continue to provide assistance in Idlib and beyond as part of the American Relief Coalition for Syria. I serve on the executive committee of the Coalition, and I am proud to say that collectively we have provided more than $670 million worth of humanitarian aid to more than 48 million beneficiaries.

However, more assistance is needed from the U.S. and the international community. We must ensure that aid reaches civilians who need it most. Access to food and medical supplies should never be used as a weapon of war - not by the Syrian government through its heavy pressure on Damascus-based organizations, or by terrorist groups, like Hay’at Tahrir al-Sham. Stabilization aid is needed to support civilians in Idleb who are pushing back against the influence of HTS; humanitarian organizations - the only entities still to receive US funding - are not designed nor are they capable of playing this role. Most importantly, civilian protection is paramount! The United States must take demonstrative action to bring an end to the fighting, as President Trump called for in Sept. 2018.

The situation unfolding in the internally displaced camp of Rukban in southern Syria is an appalling one. The more than 12,000 residents of the camp have been under siege by the Assad regime and Russia since February, with the exception of one limited, recent UN aid delivery. In turn, Jordan has refused to unseal its border to allow aid be provided to Rukban. The Syrian regime is currently winning its starvation siege of the camp, which has forced returns to regime-controlled areas which gives Assad absolutely no incentive to allow aid in. Reports of human rights abuse for residents who return to regime-held areas, need to be properly investigated. This should start by engaging with bodies like the Syrian Association for Citizen’s dignity who are involved in monitoring the situation. Apart from the obvious moral imperatives in this, the fact that these reports are not being mentioned or investigated, gives the impression to the world at large that all is well with people leaving Rukban and for countries who might help residents negotiate safe passage, Rukban gets pushed to the end of their Syria to-do list and those civilians are given no option but to see their families starve or return to danger with the regime.

What Congress Can Do to Help

There are bipartisan steps lawmakers can take to address some of these issues. First, the United States can push for a genuine return to the Geneva peace process, a track which has all but disappeared and would ideally halt the current bombing of civilians. Second, Congress should pass House Resolution 31, the Caesar Syria Civilian Protection Act, a crucial measure that penalizes the Assad government for crimes against humanity and imposes sanctions against individuals and entities complicit in war crimes. Third, Congress should approve the No Assistance for Assad Act House Resolution 1706 which similarly bars reconstruction funding to regime-held areas, knowing that this aid is likely being used to primarily rebuild loyalist areas and enrich businessmen close to the Assad regime. Fourth, it should adopt House Resolution 395 introduced by the co-chairs of Friends of a Free, Stable and Democratic Syria Caucus, that condemns the bombing of hospitals in non-regime held areas. Finally, ensure that FY 2020 funding levels for humanitarian and disaster accounts remain robust.

Members of Congress need to urge the U.S. to bypass the siege of Rukban by bringing in aid cross border, as mandated under UN Resolution 2449, from Jordan or Iraq or from the U.S. base in the al-Tanf pocket by air drops. Realistically these are the only things that will stop the people in Rukban from starving.

Thank you again for allowing me to testify on a global issue that constitutes the greatest humanitarian crisis of this century. I look forward to answering your questions.