Statement on Safe Zones in Syria 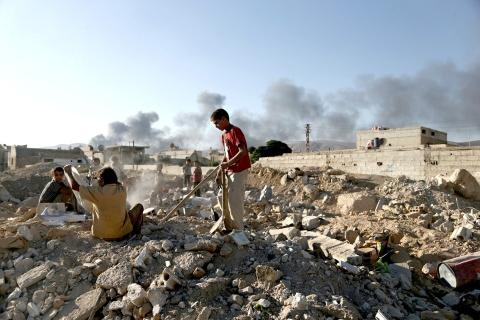 In light of current discussions surrounding proposals for safe zones, the American Relief Coalition for Syria, and its 13 member organizations, strongly believe that any proposed plan must both serve the interests of the Syrian people and actively protect civilians. A plan must  provide Syrians with a safe haven to flourish far from all sources of violence, especially the daily airstrikes on civilian areas, while allowing humanitarian organizations to provide assistance to civilians in need. The safe zones should have the necessary infrastructure to assure dignified living standards and should not compromise the unity of the country, nor lead to the forceful relocation of refugees from inside Syria nor from neighboring countries.

The American Relief Coalition for Syria recommends that any proposed plan adhere to humanitarian principles and prioritize the stabilization of the country. Any proposed plan should aim to end the bloodshed, slow the mass influx of Syrian refugees, while still guaranteeing their rights to seek refuge and asylum. The safe zones should be administered and protected by credible entities, acceptable to the intended residents.

The American Relief Coalition for Syria calls upon decision makers to engage in discussions and consult with various stakeholders regarding any proposed plan, including the Syrian diaspora, humanitarian organizations, and Syrian civil society. These groups have unparalleled knowledge about the situation on the ground, the result of working in Syria for years, and understand what considerations must be explored to ensure safety, humanitarian access, and active reconstruction in proposed safe zones.

Finally, safe zones should be considered strictly as a short-term solution that can be a catalyst for a lasting solution. After six years of suffering, the Syrian people deserve peace, freedom, dignity, and the right to self-determination.