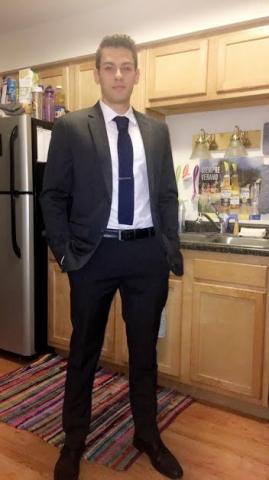 He goes by Moe, his favorite character from The Simpsons. And it’s thanks to them--along with a hearty diet of American movies, shows, and video games--that Monzer’s English is so good people have a hard time believing he’s from Syria, a country he fled five years ago after being arrested for peacefully protesting the government and its policies.

Now 21 and a senior at the University of Iowa in Iowa City, Monzer is determined to become a dentist, like his mother, and his recent admission into the university’s College of Dentistry is the first step toward making that dream come true. Classes begin in August.

Right now, he has a temporary protected status, or TPS, a designation of profound uncertainty. If the US government decides not to renew the TPS program for Syrians, all of the hard work Monzer has put into assimilating and all the plans he has made for his future may be for naught.

“Once TPS expires, my employment authorization expires as well as the driver’s license connected to it,” said Monzer. Without a valid visa, he can’t apply for the loans he needs to pay for dental school. He can’t apply for a student visa through the school because the Syrian government doesn’t want him to have a passport, he said. And if he were to apply for one, that would damage his chance for asylum here.

“It’s quite tangled up,” said Monzer, adding he is determined to remain optimistic. He must: Syria no longer feels like home to him, even though both his parents are hanging on in Damascus, where his father has long run a medical supply company.

“You can imagine the problems facing any sort of business in Syria right now. Most of the offices we had in different cities are completely destroyed,” said Monzer, and with an inflation rate that has gone through the roof, buying and selling anything has become extraordinarily difficult. So difficult, in fact, that when Monzer arrived in the US, his older brother--a doctor, the father of two young children, and a green-card holder--agreed to provide the support the younger brother needed as he finished high school here.

“At this point, Syria is more foreign to me than the US,” said Monzer. “Most of my friends in Syria are either dead, missing, or refugees in different countries.”

He has worked hard to carve a new life for himself here--a place he always knew he wanted to be.

“I always dreamt of coming to the United States to work because I always knew that my ideas and my beliefs were much more aligned with a western society and the way I’ve always wanted democracy,” said Monzer, who embraced the freedoms he found. “I mean people could say anything they want. People can criticize the president himself.”

And despite the cold indifference of the administration toward refugees, Monzer has found a warm welcome among Iowans--even those he doesn’t know but who are sympathetic to him and the local advocacy he does on behalf of other Syrians struggling with similar challenges.

“Whenever an article about me comes out in the local newspaper here I just get a ton of support from the community, from my faculty, from random people I don’t know saying that they’re showing support and promising to call their congressmen and senators to try and improve the situation,” said Monzer. “And I think that’s what really keeps me optimistic--how great the people in this country are. All the people. All my friends and their families that have accepted me, who I am, and have opened their door for me to eat with them on Thanksgiving and on Christmas.”

Still the kindness of new friends can’t shield him from the deeply troubling reality of TPS.

“For Syria, there is literally no legitimate excuse to end it other than him [Donald Trump] wanting to send people back,” said Monzer.

His message for the xenophobes?

“I’m Muslim. I went to Catholic school. I understand how similar we are. What unites us is way more than what divides us.”